A Story About Successful Aging 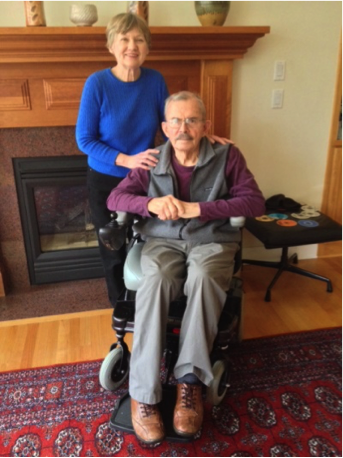 When Steve and Alice Zawojski were getting ready to go into downtown Grand Haven one day in early October, little did they know how the events that would unfold that day would impact their lives.

Steve was diagnosed with Parkinson’s years ago, and the disease has progressed to the point where he requires a wheelchair to get around. He is also dependent on Alice to drive, to get his wheelchair in and out of the car, and to push him in his chair when they’re out and about. Simple trips to town or to run errands are exhausting for both of them.

But they wanted to see a friend’s entry in the ArtWalk exhibit at the Community Center that day, and that’s where they ran into friends who invited them to stay for the premiere showing of The Age of Love documentary, part of the Four Pointes annual Lifestyle Expo. It was then that Four Pointes Lifestyle Coordinator Stacey McManus decided to approach them. She told Steve and Alice that someone in the community had an electric scooter they were interested in donating. It had hardly been used and had been in their garage for almost two years. Staff was aware that it was available, but no one had yet been identified who could use this valuable piece of equipment.

“We told them we were interested,” said Alice. “Four Pointes arranged to have it delivered to the Activity Center a few days later so Steve could try it out. Within a matter of minutes it was obvious that the scooter was a good fit for him.” The next challenge was to get the scooter home, not an easy task since it weighs almost 200 lbs. But Four Pointes Options Counselor Beth DeWyn knew that Harbor Transit buses are equipped with lifts, so a call was put in by Marian Horter, Four Pointes Center Assistant, to see if they could transport the scooter to the Zawojskis’ home. Harbor Transit said Steve had to be in it in order for them to be able to load it onto one of their buses, so Steve returned to Four Pointes the next day to meet the Harbor Transit bus for his ride home in his new chair.

The Zawojskis’ challenges were not over after Harbor Transit dropped Steve and the scooter off, however. Without a ramp, it sat in the garage for several days before neighbors came to lift it into the house. Once inside, it had an immediate impact. Steve could now get from room to room in a few seconds as opposed to a few minutes with his manual chair, and he didn’t need Alice to assist, freeing her up as well. But the lack of a ramp at the house meant that Steve’s use of the scooter was limited to inside their home.

A few days later, Alice was at a neighborhood party where friends inquired about Steve. She explained that although he now had the electric scooter, the lack of a ramp limited its use to their house. The neighbors stepped in to help again. One of them is a member of a church that builds ramps as part of their community ministry, and he made the commitment on the spot to spearhead the construction of a ramp for Steve. It was built in early December, and the change to the Zawojskis’ lives has been dramatic.

Now, Steve and Alice can take advantage of Harbor Transit to get Steve where he wants to go. “This scooter means freedom for me and my wife,” Steve said. “I’m very interested in what’s going on in the community, and now it has been opened up to me. It’s no good being confined to your house, no matter how comfortable it is.” Alice is particularly excited about how much easier it is to go places like Four Pointes where she and Steve can participate in activities and socialize.

“This is a perfect example of who we are, and how having a community agency that acts as a central point of contact can make people’s lives better,” commented Four Pointes Executive Director Brigit Hassig. “The donors knew that we could help match their generous gift with someone who needed it. Our staff is also trained to identify opportunities to improve the lives of older adults. This story demonstrates how staying connected to the community makes nonprofits like Four Pointes that much more effective.”

Steve and Alice hope that sharing their story causes others to think about how something they no longer have use for could impact someone else. “There are probably other people who have valuable equipment they could donate,” Alice added. “And with our aging population, the likelihood that someone else in the community could benefit from items you may have stored away will only increase. We should all take advantage of Four Pointes’ expertise. You just never know how one phone call could set things in motion and make someone’s life better.”

Tell us how we can help you